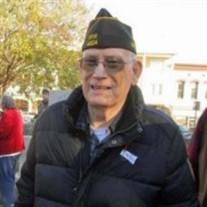 Services for Mr. Bobby Daniel Strickland will be held at 1:00 p.m., Saturday, April 2, 2022, at Beulah Thomas Baptist Church. Dr. Jerry Little will officiate. The service will conclude at Beulah Thomas Church Cemetery with full military honors. On Sunday February 13, 2022, Bobby Daniel Strickland answered the call from his Heavenly Father to come home. Bob was born June 15, 1937 in Whigham Georgia. He spent most of his school years in Bainbridge and graduated in 1955 from Bainbridge High School. After graduation, he entered the United States Air Force and spent the next 20 years moving from place to place. He was assigned to Germany where he met his wife as well as to Spain, Okinawa, and various locations in the United States. After retiring from the Air Force, he worked at and retired from the Department of Labor. Bob loved to travel with his wife and camping friends, where he spent much time on the road visiting 43 of the 50 states. His favorite way of talking to people about his travels was to say “I retired to see as much of the United States as possible. He served as Elder Emeritus at First Presbyterian Church. He was a member of the Veterans of Foreign Wars and American Legion where he served as Adjutant for almost 20 years and Commander for 6 Years. He is survived by his wife of 63 years, Gerda, his son Charles Strickland and his wife Karen, his daughter Nancy Kennedy and her husband Randall; his grandchildren Robin Kennedy, Melanie Kennedy, Brittney Dixon, Corey Strickland, Sydney Strickland, and Charlie Strickland as well as numerous great- grandchildren. In lieu of flowers, the family requests memorials be made to the First Presbyterian Church Youth Education Fund, P.O. Box 7067, Bainbridge, GA 39818. On-line condolences may be sent at www.Coxfuneral.net. Cox Funeral Home in charge of arrangements.

The family of Mr. Bobby Daniel Strickland created this Life Tributes page to make it easy to share your memories.

Services for Mr. Bobby Daniel Strickland will be held at 1:00...

Send flowers to the Strickland family.