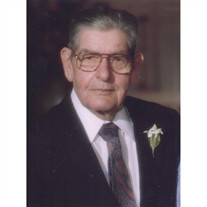 Funeral services for Mr. Cecil Mills, age 92 of Bainbridge, will be held Thursday, May 20, 2010 at 2:00 PM at First Baptist Church with Rev. Paul Medley officiating. Private Interment will follow in Oak City Cemetery with Curt Mills, J. Mills, Charlie Skipper, Archie Mills, Herman Mills, and Archie Dodson serving as active pallbearers. Honorary pallbearers will be Pascal Ward, Jerry Pollock, David Rach, Lofton Willis, Donald Brown, Stan Killough, Jack Palmer, Bud Morris, Joe Peters, Jabo Duke, Billy Edison, Willis Dodson, and Bob McCullum. Visitation will be held Wednesday, May 19, 2010 from 6:00 - 8:00 PM at Cox-Ware Funeral Home. Mr. Mills died peacefully on May 18 surrounded by family. Mr. Mills was a Barber for 54 years. He was born the seventh of seven children on September 1, 1917 to Mary Elizabeth and Archie Taylor Mills. He was born and lived his entire life in Decatur County, leaving only to serve his country proudly in World War II. He served in the US Army and was part of the second phase of the Western Front that landed at Omaha Beach in 1944. Upon returning to Bainbridge, he married Janelle Poitevint in 1947. Cecil was a member of First Baptist Church and a Third Degree Mason of the Orion Lodge #8. He especially enjoyed gardening, fishing, hunting and reading. Until the day of his passing Cecil was quick with a joke and always ready to tell a story. His sharp wit and sense of humor will be missed by all who had good fortune to know him. He had an uncanny ability to remember details and always addressed his customers, friends and acquaintances by their first name. Left to honor his memory are his wife of 63 years, Janelle Poitevint Mills; sons Don (and Sue) Mills of Tallahassee, Jerry (and Diane) Mills of Bainbridge, and Dr. Roger (and Joyce) Mills also of Bainbridge; one daughter Deborah (and John) Perkins of Tallahassee. Grandchildren include Christie Perkins Luce, J Mills, Curt Mills, Amanda Perkins, Sarah Mills, Mary Alice Mills, and Janet Mills; great grandchildren Carson, Dillon, and Allyson; and several beloved nieces and nephews. The day that we fear as our last is but the birthday of eternity Seneca Mr. Mills was preceded in death by his parents and was the last of seven children.

The family of Cecil Mills created this Life Tributes page to make it easy to share your memories.

Funeral services for Mr. Cecil Mills, age 92 of Bainbridge, will...

Send flowers to the Mills family.