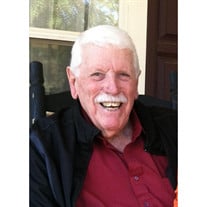 Mr. Clyde A. Coleman, Sr. passed away Thursday, January 3, 2013, at his home in southern Grady County. Clyde Augustus Coleman was born in Holley, Florida on May 14, 1924 to Percy Lamar Coleman and Susie Safronie Coleman. Clyde Coleman served in the United States Army during World War II in the South Pacific theatre of operations under General Douglas MacArthur. After the war Clyde returned to the family business of road construction and built new roads, highways and airfields throughout Florida and Georgia. Over the years he owned and operated successful insurance and real estate companies. Clyde married the love of his life, Reba Smith Coleman, on May 5, 1946. They raised a family of six children, 5 boys and 1 girl. On July 4, 1954 Clyde accepted Christ. His conversion was so powerful it impacted many lives over many years and later led him to author a book "Overshadowed" . Clyde Coleman had a heart for people. He loved preaching and teaching the Word of God and he shared his faith with boldness. Throughout the years Clyde and Reba ministered to many people together through public speaking, radio broadcasts and television shows. Mr. Clyde Coleman is survived by his wife, Reba Smith Coleman of Cairo, Georgia; children, Gale Farrell Coleman and wife, Phyllis of Hull, Georgia; Garrett Kester Coleman and wife, Kathy of Toccoa, Georgia; Gregory Brant Coleman and wife, Deborah of Snellville, Georgia, Marsha Coleman Sturm and husband, Dave of Soddy Daisy, Tennessee; Clyde A. Coleman, Jr. and wife Renee of Whigham, Georgia; David Jonathan Coleman, Sr. and wife, Kerry Ann of Cairo; Brothers William F. Coleman of Tallahassee, Florida and Percy L. Coleman, Jr. of Enterprise, Alabama; 14 grandchildren and 9 great-grandchildren. Clyde was preceded in death by his parents Percy and Susie Coleman, brother Carl Coleman, a brother who died at birth and his daughter-in-law Lyn Coleman. Donations may be made in his honor to Faith Christian Center Building Fund, 1548 Highway 188 North, Cairo, Georgia 39828.

The family of Clyde Augustus "Coleman, Sr." created this Life Tributes page to make it easy to share your memories.