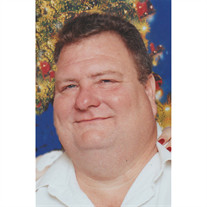 Mr. Dale Scott Addison, Sr., age 54, passed away on Thursday, November 10, 2016, at his home in Bainbridge, Georgia. A memorial service will be held at 6:00 p.m., Thursday, November 17, at the Cadwell Chapel of Cox Funeral Home. Rev. Dewitt Phillips will officiate. Dale Scott Addison, Sr. was born February 13, 1962, in Tampa, Florida, to Leon Addison and Carol Ryan Addison. He loved to work on vehicles and do woodworking. Scott enjoyed fishing. He was a talented baker and cake decorator. He had a fascination with tattoos. Scott enjoyed James Bond movies. Mr. Addison was a member of West Bainbridge Baptist Church. His children say he was the best Daddy and Papa ever. Scott cherished times at the beach crab hunting with his children and grandchildren. Christmas was a very special time of year for Scott. He enjoyed everything about it. He loved to "aggravate" those he loved most. Scott will be missed by the family and many friends he loved so very much. Scott Addison is survived by his mother, Carol Addison of Lake Seminole, Georgia; the \\love of his life\\, Amy Addison of Bainbridge; his children, Ashtyn Addison of Bainbridge, Andrea Spivey of Brunswick, Georgia, Dale \\Scotty\\ Addison, Jr., Havana, Florida, Summer Addison of Minerva, Ohio, Jessica M. Addison of Bainbridge, and Lacey Pieczarka of Havana; brothers and sister, Jimmy Addison and wife, Ruby of Milledgeville, Georgia, Marie Barnes of Fitzgerald, Georgia, and Chuck Addison of Lake Seminole; grandchildren, Emmaleigh Gibson and Wynter Spivey; and the "love of his life" , Amy Addison of Bainbridge. Preceding him in death were his father, Leon Addison and brother, David Addison.

The family of Dale Scott Addison, Sr. created this Life Tributes page to make it easy to share your memories.