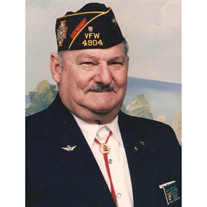 Daniel Willis (Dan) Arnold, 77, of Bainbridge, Ga passed away Friday, December 3rd, at his residence. A service will be held 12:00 noon, Tuesday, December 7, 2010, at Cox-Ware Funeral Home Chapel. The Rev. Ron Kirkland, officiating. The family will receive friends 10:00-12:00, prior to the service. Daniel was born in Bainbridge, Georgia on March 8, 1933, a son of the late Kitty Lee (Williams) and Jessie Frank Arnold. He served in the U.S. Air Force during the Korean Conflict. He spent a lot of time working with the local VFW group helping others. Dan loved playing bingo, dancing and fishing. He was a friend to many and stranger to none. Dan retired from Amoco Fabrics where he worked as an electronics tech. Dan Arnold served as the Commander of VFW Post #4904 and was a life member; Commander of American Legion Post #62, and was a member of the Moose Lodge #1075 in Tallahassee, Florida Daniel Willis Arnold is survived by children: Suzanne Schmutz; Chris Buckbee; Daniela, wife of Dwight Truitt; Pat, wife of Johnny Cooper; Kathy Shelton; Karen, wife of Carroll Suggs; Lisa, wife of Billy Ray Smith; and Ronnie, husband of Kim Shelton. He is also survived by many, many grandchildren and great grandchildren and numerous nieces and nephews. Daniel is also survived by sisters, Myra Thomas, Kitty Henderson, Betty DeWitt; a brother, James Warren Arnold. Also by a special friend, Minnie Owens. Preceded in death by his parents, Jessie Frank and Kitty Lee Arnold; and siblings, Mary Cameron and Jesse Frank Arnold. In lieu of flowers memorial contributions may be made to a Hospice of your choice. Cox - Ware Funeral Home entrusted with arrangements.

The family of Dan Arnold created this Life Tributes page to make it easy to share your memories.

Send flowers to the Arnold family.