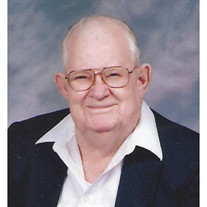 Mr. Dawes Lawrence, 87 years of age, died Sunday, July 1, 2012, at his residence in Bainbridge,Georgia. Mr.Lawrence is a former resident of Albany, Ga. and Jacksonville, Fl. He was a Navy Veteran of World War 2. He was a member of North View... View Obituary & Service Information

The family of Dawes Lawrence created this Life Tributes page to make it easy to share your memories.

Send flowers to the Lawrence family.