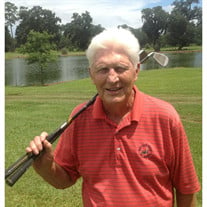 Donald Eugene Bushore, 91, passed away on August 20, 2017 after fighting a long battle with COPD. He was surrounded by his family at his home overlooking Lake Seminole in Georgia. Donald was born in Patterson, New Jersey to Helen and Eugene Bushore. He is survived by Steve and Sandra (Sam) Bushore, Michael Bushore; one daughter, Linda Bushore Quinn and husband Jerry Quinn, one sister Darleen Gambuti, and he was grandfather to numerous grandchildren and great-grandchildren. Donald enlisted in the Navy at the age of 17, serving in the Navy during the final stages of World War II. Donald was a graduate of Brigham Young University (BYU) and returned later to earn his Master Degree in Business Administration. He participated in sports while attending BYU and earned the starting quarterback position during the 1946, 1947, 1948 and 1949 football seasons. Some of his greatest memories were playing sports at BYU, coaching on the high school/college level, and teaching golf. In the later part of his life, Donald joined the Quincy Golf Club and began teaching golf there. Donald often spoke of the fond memories he obtained and the many friends associated with the Quincy Golf Course. Members of the Quincy Golf Club and others knew Donald E. Bushore as the "Silver Fox" teaching professional. The members and management at the Quincy Golf Club were like a second family to him. Donald asked his family to conduct a small gathering to celebrate his life on August 31, 2017 at 11:00 AM by sprinkling his ashes on the Lake of the 9th Hole, Quincy Golf Course. He once indicated, "I've put so many golf balls in this lake, it is only fitting that my ashes should end up in this Lake as well" . Per his request, there will be no other service held. During the final days, Hospice provided an outstanding service and Donald asked in lieu of flowers, please make a donation in his name, to South West Georgia Hospice, 117 South Donalson Street, Bainbridge, Georgia.

Donald Eugene Bushore, 91, passed away on August 20, 2017 after fighting a long battle with COPD. He was surrounded by his family at his home overlooking Lake Seminole in Georgia. Donald was born in Patterson, New Jersey to Helen and Eugene... View Obituary & Service Information

The family of Donald Eugene Bushore created this Life Tributes page to make it easy to share your memories.

Send flowers to the Bushore family.