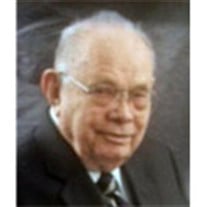 Dr. Charles Knight went to be with The Lord he served so faithfully on Friday August 7th 2015. Beloved son of the late Mr. and Mrs. Charles Knight, Sr. of Harrodsburg, Kentucky, He married Elsie Renfroe on January 30th, 1946. Dr. Knight served as a missionary to Nigeria, pastor of Southside Baptist Church, Lakeland Fl., at Emory Baptist Church, Decatur, Ga., and Snapfinger Road Baptist Church. He taught at Mercer University, Atlanta Campus, until he was 90 years old. This tireless servant is survived by Elsie, his wife of 69 years, and his sons, Charlie Knight of Clayton, Ga. and Ren Knight of Loganville, Ga. He has 3 granddaughters and 4 great grandchildren and is also survived by his sister, Dorothy Lee Wilson of Nashville, Tenn. Dr. Knight will be laid to rest in Bainbridge, Ga. on Monday, August 10th, 2:00 p.m., at Oak City Cemetery. A memorial service at his home church, Claremont Hills, is planned for the following Saturday, August 15th, at 1:00 p.m. This wonderful husband, father, brother and grandfather had a favorite poem...Keep A-Goin\\'! by Frank L Stanton. The family is comforted in the knowledge that he is still \\keepin a goin\\'\\ with His Heavenly Father. Condolences can be sent to Elsie Knight at 3560 Claude Brewer Rd., Loganville, Ga. 30052. On-line condolences may be sent to www.Coxfuneral.net. In lieu of flowers, please make donations to Abbey Hospice, 215 Azalea Court, Social Circle, Ga.

The family of Dr. Charles W. Knight, Jr. created this Life Tributes page to make it easy to share your memories.

Dr. Charles Knight went to be with The Lord he served so faithfully...