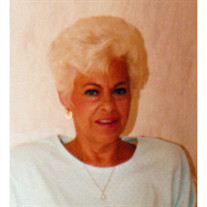 Mrs. Elisabeth Seeger Kirkconnell, age 81, passed away early Saturday, March 26, 2016, at Cross Landing Nursing Center in Monticello, Florida. A memorial service will be held on Sunday, April 3, 2016, 1:30 p.m., at Recovery United Methodist Church. The Rev. Donna Sue Roberts will officiate. Elisabeth Seeger was born December 7, 1934 in Darmstadt, Germany. She and her family lived through some very dark days during the Nazi occupation of World War II. After her town was liberated by the Allied soldiers, Elisabeth decided she would, one day, live in America. In her 20s, she and her husband did move to the USA. That was nearly 60 years ago. Elisabeth worked as a hairdresser, when she first came to the U.S. She was married to Thomas Murphy and, then, to Walter Kirkconnell, both preceded her in death. A resident of Havana, Florida, Elisabeth was a fantastic cook and kept her yard to perfection. Elisabeth Seeger Kirkconnell is survived by her daughter, Marnie Johns of Havana, Florida; grandchildren, Paul Matthew Johns and wife, Kacie of Cairo, Georgia, Ashley Elisabeth Johns of Atlanta, Georgia, and Sarah Margaret Johns of Bainbridge, Georgia; a great-grandchild, Mary Madeline Johns; and one sister, Irene Hees. She was preceded in death by her parents, Ludwig Seeger and Frieda Guthardt Seeger, and husbands, Thomas Murphy and Walter Kirkconnell.

The family of Elisabeth Kirkconnell created this Life Tributes page to make it easy to share your memories.

Send flowers to the Kirkconnell family.