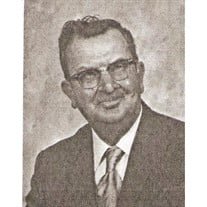 Funeral Services for Mr. Elmer Jackson Hutto, 90, of the Mt. Pleasant community will be held Friday, January 23, 2009 at 2:00 PM at Mt. Pleasant Baptist Church with Rev. Conrad Salter officiating. Burial will follow in the church cemetery with Kenneth Kelley, Larry Bates, Phillip Martin, Greg Brock, Dewey Brock Jr., Brantley Harrell, and Wesley Powell serving as casket bearers. Visitation will be held Thursday, January 22, 2009 from 5:00 - 7:00 PM at Cox-Ware Funeral Home. Mr. Hutto was born November 13, 1918 in Decatur County, GA to the now late James Jefferson and Ida Martin Hutto. He attended Mt. Pleasant School and was a farmer and resident of Decatur County, all of his life. He was a good steward of the land that he was born on, worked on, and died on. He married the now late Myrtle Harrell Hutto April 9, 1941 and was preceded in death by her after 57 years of marriage. The love of his life was family. He was not a man of many words, but his words were wisdom. Mr. Hutto was a member of Mt. Pleasant Baptist Church. Mr. Hutto passed away Tuesday, January 20, 2009 at Bainbridge Memorial Hospital. He is survived by two daughters; Jan Hutto of Bainbridge, GA and Sylvia Hutto McCullars of Gainesville, FL, and one granddaughter; Lana Elaine McCullars of Gainesville, FL. Mr. Hutto was preceded in death by his parents, his wife, his brothers and sisters, and one son, Randy McKinley Hutto.

The family of Elmer Jackson Hutto created this Life Tributes page to make it easy to share your memories.

Send flowers to the Hutto family.