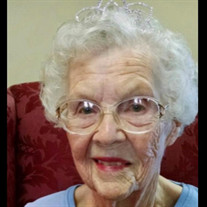 Eva Causey passed away Monday, June 21, 2021, at Extendicare Assisted Living Facility in Dothan, Alabama. She was 95 years old. Eva Heard was born on a farm in Baker County, Georgia on March 25, 1926, to George Washington (Wash) Heard and Ida Moore Heard. She was a farm girl who never even went to town until she was in high school. She was a child of the Depression and a young bride of World War II. She counted her pennies all her life, even when she had no need to. She married Elmo Hendley after Pearl Harbor and followed him through all his State-side Assignments in the Army returning to Bainbridge after the war to start a life and start a family. She raised two children and worked all her life to make their lives better. She did. After the loss of her husband, Elmo in 1971, she met and married a firefighter from Ft. Rucker, James Causey. When he retired, he became a Baptist minister and she spent the remainder of their days as a minister’s wife going from church to church as he was called. She was a loving mother and the head of five generations of family. She leaves behind a daughter, Diane (Isaac) Tyler, and a son, Jerry Hendley. She also leaves behind five grandchildren, Shana (Chris) Wallace, Jeremy (Rita) Pope, Karen (Kevin) Drumwright, Laura (Mitch) Starkey, and Julianna (Cody) Morelock, eight great grandchildren, and four great, great grandchildren. She was loved. Funeral Services will be Friday, June 25, 2021, at Mt. Zion Baptist Church, Bainbridge, Georgia. The service is at 11:00 a.m. with visitation starting at 10:00 a.m. Burial will follow at Mt. Zion Baptist Church Cemetery. On-line condolences may be sent at www.Coxfuneral.net. Cox Funeral Home in charge of arrangements.

The family of Mrs. Eva Causey created this Life Tributes page to make it easy to share your memories.

Send flowers to the Causey family.