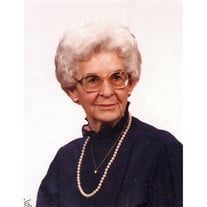 Mrs. Florine Hart King, age 92, passed away Sunday, December 6. 2015, at Bainbridge Memorial Hospital. Services for Mrs. King will be held at 11:00 a.m., Thursday, December 10, 2015, at the First Baptist Church in Bainbridge, Georgia. The Rev. Paul Medley and Mr. Roger Rykard will be officiating. Interment will follow in Bethany Cemetery. Christian King, Gaven King, Todd Conyers, Tommy King, Butch King, and Greg Fletcher will serve as pallbearers. The members of the Lydia Sunday School Class will serve as honorary pallbearers. The family will receive friends from 6:00-8:00 p.m., Wednesday, at Cox Funeral Home Chapel. Florine Hart was born July 1, 1923 to Leslie Lee (Buck) Hart and Florence West Hart. Although born in Waycross, Georgia, Florine was raised in Valdosta, Georgia. She married the love of her life, DeWitt King, who has preceded her in death. Mrs. King worked many, many years for the City of Bainbridge. She was the city treasurer. Florine loved to read and play games on her computer. As much as she enjoyed those things, her real love was her church. She was a faithful member of the First Baptist Church for 69 years. She was a member of the Saints Alive Choir, Helen Lane W.M.U. (treasurer), and Lydia Sunday School Class. Mrs. King was also a member of the Eastern Star. Florine loved to help people. She never had a bad word to say about anyone. Florine King adored her family and will be sorely missed by all. Florine King is survived by her daughter-in-law, Vicki King of Americus, Georgia; grandson, William Shannon King and wife, Deanna of Sharpsburg, Georgia; great-grandchildren, Gabrielle King, Christian King, and Gaven King, all of Sharpsburg; and numerous nieces and nephews. She was preceded in death by her parents, Buck and Florence Hart; husband, Zackie DeWitt King; and son, William Curtis King.

The family of Florine King created this Life Tributes page to make it easy to share your memories.

Send flowers to the King family.