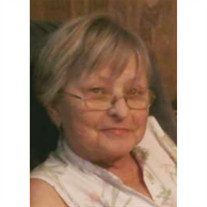 Mrs. Helen Youvonne Beach Howell, age 68, passed away early Wednesday, December 31, 2014, at her home in Iron City, Georgia. The funeral service for Mrs. Howell will be held at 11:00 a.m., Saturday, January 3, 2015, at Cox Funeral Home Chapel. Bro. Ross Plowdon will officiate. The family will receive friends one hour before the service, beginning at 10:00. Helen was born May 28, 1946 in Donalsonville, Georgia to Chester Lee Beach and Eunice Irene Askew Beach. She was married to Lawrence Dwight Howell, Jr., who has preceded her in death. Mrs. Howell was a member of Rock Pond/Olive Grove Primitive Baptist Church. Helen loved to read. She liked to have people visit in her home and liked to go out to eat. Helen was wild about her soap operas and science fiction television. Helen Howell was such a "people person" . She loved and enjoyed life. Helen Howell will be sorely missed by the family and friends she loved so dearly. Helen Howell is survived by her children, Barbara Todd and husband, Joshua Todd, Jr. of Colquitt and Lawrence Dwight Howell, III, also of Colquitt; grandchildren, Joseph Barber of Iron City, Julia Kimmins and Wade Hester of Donalsonville, Jordon Howell of Colquitt, Belinda Buck and husband, James of Dothan, Alabama, Joshua Todd, Jr. of Colquitt, Jay Kimmins of Colquitt, and Elvis Coddington of Colquitt; great-grandchildren, Mya Barber of Iron City, and Madden Gorman of Colquitt; sisters, Robbie Hill and husband, Larry of Iron City, and Mary McCloud of Bainbridge, Georgia; and brother, Michael Beach of Iron City. She was preceded in death by her parents, husband, and sister, Emeline Wyatt.

The family of Helen Youvonne Howell created this Life Tributes page to make it easy to share your memories.

Send flowers to the Howell family.