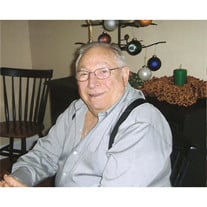 Graveside services for Mr. Hormidas William "Provo" Provost, age 87 of Climax, GA, will be held Monday, February 23, 2009 at 2:00 p.m. at Piedmont Cemetery in Calvary, GA with Rev. Steve Poppell officiating. Burial will follow at Piedmont Cemetery. Visitation will be held Sunday, February 22, 2009 from 5:00 until 7:00 p.m. at Cox - Ware Funeral Home. Mr. Provost was born in West Springfield, MA the son of the now late Hormidas William and Anelda Fortiner Provost. He was an Air Force Veteran serving during WW II and the Korean conflict joining when he was 18 years old. He moved to Bainbridge as an airplane mechanic at the air base. He met and married Lillian Hazel Byrd in August of 1943. After leaving the service he was employed by Englehard Corp. in 1960 and retired after 24 years of service. He was of the Catholic faith and loved his family, fishing, talking to friends and had a good sense of humor. Mr. Provost passed away Friday, February 20, 2009 at the residence of his daughter. He is survived by one daughter; Hazel (Husband Michael) Betts of Climax, GA; one sister; Doris Sleeper of West Springfield, MA; one brother; Eugene Provost of Mystic, CT; and four grandchildren; Amanda Betts of Tallahassee, FL, Staci Betts of Athens, GA, Robin Betts of Toccoa, GA, and Eric Betts of Tifton, GA. Mr. Provost was preceded in death by his parents, his wife, Lillian Hazel Byrd Provost, son, Hormidas W. Provost, Jr., one sister, Pearl Kendzierski, and one brother, Alfred Provost.

The family of Hormidas William Provost created this Life Tributes page to make it easy to share your memories.

Send flowers to the Provost family.