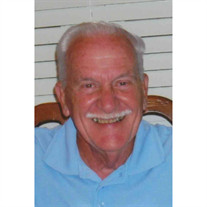 Mr. James (Jim) Edward Rittmeyer, age 87, of Cairo, Georgia, passed away in the early morning hours of Tuesday, September 26, 2017. A funeral mass will be held at 10:00 am, Saturday, September 30, 2017, at St. Elizabeth Ann Seton Catholic Church. Father Godfred Boachie-Yiadom will officiate. Interment will follow in Greenwood Cemetery, with military honors. Daniel Goree, Steve Goree, Steve Miller, and Buddy West will serve as pallbearers. The family will receive friends 5:00 - 6:30, Friday, September 29, at St. Elizabeth Ann Seton Catholic Church in Cairo. James Edward Rittmeyer was born in Huntingburg, Indiana, to Patrick Rittmeyer and Veronica Mattingly Rittmeyer. Jim married the love of his life, Betty Jean Alred. Betty preceded him in death, February 16, 2011. Jim served over 20 years in the United States Air Force. He graduated from the University of Tampa. After retirement from the Air Force, Jim worked for and retired from G.T.E. Jim and Betty raised their 2 daughters and enjoyed the grandchildren. They moved to Cairo in 1990 and became very active in their community. Mr. Rittmeyer was a member of Elizabeth Ann Seton Catholic Church. He was a past president and past Lt. Governor of the Grady Golden Kiwanis Club. He was a past president of the Grady County United Way. In 2000, Jim was selected as Grady County Man of the Year and American Red Cross Volunteer of the Year. A wonderful husband, loving father, proud grandfather, and great friend, Jim Rittmeyer will be deeply missed by his family and many friends. Jim Rittmeyer is survived by his daughters, Teresa Goree and husband, Steve of Apopka, Florida and Stephanie Rittmeyer of Richmond, Virginia, grandchildren, Caitlyn, Sydney, and Daniel Goree of Apopka; and dear friend, Jeanette Gandy. He was preceded in death by his parents, wife, and brothers, Henry Rittmeyer and Rev. Robert Rittmeyer. Donations may be made in Jim's memory to the American Cancer Society, 507 West Third Avenue, Suite 4, Albany, Georgia 31701.

The family of James (Jim) Edward Rittmeyer created this Life Tributes page to make it easy to share your memories.

Send flowers to the Rittmeyer family.