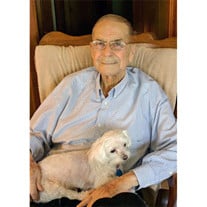 Mr. James (Jim) William White, age 88, passed away January 6, 2019, at his home in Cairo, Georgia. Services for Mr. White will be at 3:00 pm, Friday, January 11, 2019, at First Baptist Church in Cairo. The Rev. Chris Allen will officiate. Interment will follow in Greenwood Cemetery. The family will receive friends one hour before the service, beginning at 2:00. Jim was born June 10, 1930 in Trenton, New Jersey, to James William White, Sr. and Helen Berish White. After graduating from Trenton Central High School, he joined the U.S. Air Force. It was while he was stationed in Georgia that he met his wife, June, married, and settled in Cairo, Georgia. Jim was well known in the Southeast for his bird carvings and enjoyed visits from numerous friends who would drop in to his workshop to watch him carve. He loved that so many people were made happy by his carvings. He was a duck hunter, fisherman, and wildlife conservationist. Jim White is survived by his children, Cynthia White Camilleri, James William White, and Jeffery Steven White; grandson, Alexander White Camilleri; and siblings, Joan White Daly and Robert White (Pauline). He was preceded in death by his parents, wife of over 60 years, June Sumner White, and sister, Charlotte White Ludwig.

The family of James (Jim) William White created this Life Tributes page to make it easy to share your memories.

Send flowers to the White family.