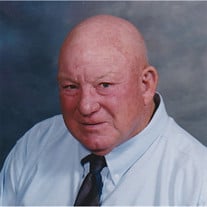 Mr. James Elrod Mobley, age 87, passed away Sunday, March 5, 2017, at his home in Thomasville, Georgia. Services for Mr. Mobley will be held at 3:00 p.m., Tuesday, March 7, 2017, at the Cadwell Chapel of Cox Funeral Home, Bainbridge, Georgia. Services will conclude at the funeral home. The Pastor Steve Brooks will officiate. A private interment will be held at Woodlawn Cemetery in Whigham, Georgia. The family will receive friends one hour before the service, beginning at 2:00 p.m. James Elrod Mobley was born March 10, 1929 in Whigham, Georgia. His parents, Daniel Eugene Mobley and Anna Cornelia Maxwell Mobley, have preceded him in death. December 2, 1953, he married the love of his life, Hazel Blanchard Mobley. They have shared 63 wonderful years together. James was a hard worker. He retired as a heavy equipment operator and shop foreman for the Dobbins Company. He loved to reminisce about the huge undertaking it was when he poured the concrete for the building of Underground Atlanta. Now retired, He and Hazel bought a farm in Dearing, Georgia. His farm became well known for raising Limousin cattle. It was the largest herd of Limousins in Georgia. He loved to go bird hunting and to go fishing. James Elrod Mobley will be deeply missed by his family and many friends. Mr. Mobley is survived by his wife, Hazel Blanchard Mobley of Thomasville; sisters, Wilma Brinson of Whigham and Anna Ruth Elian of Thomasville; and many wonderful nieces and nephews. In lieu of flowers, donations may be made to your favorite charity.

The family of James Elrod Mobley created this Life Tributes page to make it easy to share your memories.

Send flowers to the Mobley family.