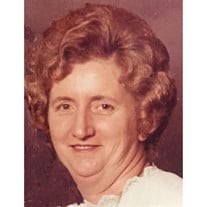 Mrs. Jean Allen Watts, age 78, passed away Monday, December 12, 2016 at her home in Grady County, Georgia. Funeral services for Mrs. Watts will be held at 2:00 p.m., Thursday, December 15 at Eastside Baptist Church in Cairo, Georgia. The Rev. Carl Harrell will be officiating. An interment will follow in Forest Lawn Cemetery. The family will receive friends one hour before the service, beginning at 1:00 p.m. at Eastside Baptist Church. Jean was born May 1, 1938 in Easom Hill, Georgia to parents William Frank Allen and Annie Roberts Allen. She wed David O'Neal Watts in 1960 and they enjoyed 56 years of marriage. For more than 35 years of her career she worked at Ithaca Manufacturing Company where she retired in 1999. Following her retirement, Jean dedicated her time to her family and her hobbies. Jean enjoyed traveling so much so that she and David once drove from Georgia to Alaska on a road trip adventure of a lifetime. She was an avid reader and had a spirit for giving to those less fortunate. We may never know the extent of how much she helped those in her community in their times of need. Above all, she loved her family. She never missed a baseball game or a dance recital if one of her children or grand-children were involved. She was a champion of loving her family through good times and bad and she will be missed dearly by all those she has left behind. Jean Allen Watts is survived by her husband, David Watts of Pelham, Georgia; children, Neal Watts (Becky) of Valdosta, Georgia and Dennis Watts (Connie) of Ochlocknee, Georgia; grandchildren, Allison Smith (Brad) of Houston, Texas and Lee Watts (Amber) of Valdosta; great-grandchildren, Olivia Watts and Harper Watts; and sister, Frances Cox of Cairo, Georgia. She was preceded in death by her parents; brother, Jerry Allen; sister, Diane Murphy; and brother-in-law, Wallace Cox. Donations may be made in her honor to St. Jude Children's Research Hospital, P. O. Box 1000, Dept. 142, Memphis, Tennessee 38101-9908. On-line condolences may be sent at www.Coxfuneral.net. Cox Funeral Home in charge of arrangements.

The family of Jean Watts created this Life Tributes page to make it easy to share your memories.

Send flowers to the Watts family.