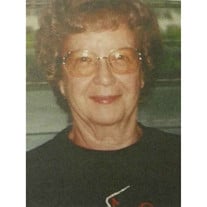 Mrs. Joanne Waltman Podawiltz, age 84, passed away Saturday, May 16, 2015, at Bainbridge Healthcare Center in Bainbridge, Georgia. A graveside service will be held in Wisconsin Rapids, Wisconsin, where the ashes will be interred. Joanne was born on March 8, 1931, in Evansville, Indiana. She graduated from Benjamin Bosse High School in 1948 and graduated from Louisville General Hospital School of Nursing in 1951. Her expertise was varied as she worked in Public Health, Visiting Nurses, Psychiatry, Spinal Cord Injury, and, of course, medical and surgical units. After 42 years in nursing, Joanne retired from St. James Community Hospital in 1993, where she had worked for 13 years. In 1953, while working at Jackson Memorial Hospital, in Miami, Florida, Norbert Podawiltz entered her life and they were married on December 4 of that year. They spent 61 years together. In 1956 they purchased a 38 ft. boat from the Coast Guard in Milwaukee and worked on it for many months. They traveled in their "yacht" across Lake Michigan and eventually to the Mississippi River. Down the Mississippi to the gulf, across the state of Florida to the eastern inland waterway and to Miami, again. This began their boating life. On 2 different occasions they lived on boats in Miami. The boating life ended in 2004, following Hurricane Charley. They managed to sell the boat, which was not badly damaged, sold their home and moved to Bainbridge, Georgia, where they remained happy and settled. Joanne Podawiltz is survived by her brother-in-law, Edgar Fetscher, nieces and nephews, and her 2 beloved cats. She was preceded in death by her twin sister, Marianne York, sister, Audrey Fetscher, and husband, Norbert Podawiltz.

Mrs. Joanne Waltman Podawiltz, age 84, passed away Saturday, May 16, 2015, at Bainbridge Healthcare Center in Bainbridge, Georgia. A graveside service will be held in Wisconsin Rapids, Wisconsin, where the ashes will be interred. Joanne was... View Obituary & Service Information

The family of Joanne May Podawiltz created this Life Tributes page to make it easy to share your memories.

Send flowers to the Podawiltz family.