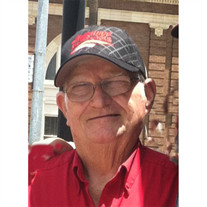 Mr. John Robert (Bob) Taylor, age 79, passed away Wednesday, September 7, 2016, at Memorial Hospital in Bainbridge, Georgia. A memorial service will be held for Mr. Taylor at 1:00 p.m., Saturday, September 10, 2016, at Ocilla Baptist Church in Ocilla, Georgia. Rev. Rob Dowdle will officiate. John Robert Taylor was born December 7, 1936, in Albany, Georgia, to Richard Henry Taylor and Beatrice Ione Stripling Taylor. He married the love of his life, Judith Ann Bowmen. Bob graduated from F.S.U. and, then, received his Master's Degree from the University of Georgia. Until his retirement, he was employed with the Georgia Department of Rehabilitation. Mr. Taylor was a member of the Masonic Lodge. Before he retired, he was very active in civic activities and particularly enjoyed the Lions Club. Mostly, Bob Taylor was all about family. He loved going to watch the grandchildren as they took part in their activities. Athletics, dancing, it did not matter; he was proudly supporting and encouraging. John Robert (Bob) Taylor is survived by his wife, Judith Ann Bowman Taylor of Bainbridge, Georgia; children, Saundra Ethridge and Kelli Hughes and husband, Mike of Adel, Georgia; grandchildren, Amanda Scarbary and husband, Wesley, Caitlin Ethridge, Taylor Hughes and wife, Shelby, Bailey Hughes, and Ethan Ethridge; and great-grandchildren, Madison Scarbary, Caiden Ethridge, and Colton Hughes. He was preceded in death by his parents and brother, Richard Henry Taylor, Jr. In lieu of flowers, donations may be made in his honor to the Lions Club International Foundation, Department 4547, Carol Stream, Illinois 60122-4547.

The family of John (Bob) Robert Taylor created this Life Tributes page to make it easy to share your memories.

Send flowers to the Taylor family.