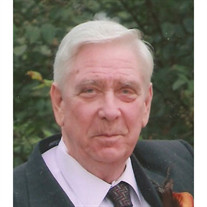 John Earl Cloud was born October 25, 1938 to the late Joe and Jessie Mae Cloud. He is survived by his wife, Delores Trawick Cloud, of 57 and a half years. Daughters, Denise (Ricki) Laing of Bainbridge, Alicia (Troy) Sheffield of Iron City and Rene (Mark) Chason of Bainbridge. A sister-in-law, Debra (Grady) Miller, that was like a daughter to him. Six grandchildren , Jessica and Will Laing, Kyle (Ashley) and Drew Sheffield, and Savanna and Kassidy Chason. One great grandchild, Harper Grace Sheffield. Two brothers, Joe (the late Lena) Cloud of Bainbridge and Melvin (Melba) Cloud of Bainbridge. He is also survived by one sister, Gloria (Bill) Martin of Colquitt. He is also survived by several nieces, nephews, and one aunt, Betty Sue Long. He was in the National Guard and Army for five years. John got saved and joined First Christian Church of Bainbridge in April of 1966. He has held several offices in the church and at the present he is an Elder and Treasurer. He graduated Valedictorian in 1957 at West Bainbridge High School. John started working with Englehard Minerals and Chemicals on November 11, 1957. He started out as a lab tester and through the years he had several promotions without a college degree. He retired May 1994 as plant superintendent of the Attapulgus division. They made medicines, cat litter, face powder, and other products. After John retired, he took up wood working, which he taught himself how to do. This was his greatest enjoyment, besides his family. He made bowls, rolling pins, cutting boards, salt and pepper mills, lazy susans, honey dippers, and toothpick holders out of different exotic woods. He attended craft shows for about 15 years. Visitation will be held at 6:00 - 8:00 p.m., Saturday, May 2, 2015, at Cox Funeral Home. Funeral services will be held at 2:00 p.m., Sunday, May 3, 2015, at the First Christian Church in Bainbridge with Pastor Stanley Phillips officiating. Interment will be at Oak City Cemetery. Pallbearers will be Bruce Mann, Dennis Day, Dewayne Culverson, Terry Day, Charles Owens, Winston Brock, Wallace Cato, and Steve Barrineau. Honorary Pallbearers will be Jim Lee, Joel Hughes, Jimmy Corbett, Paul Maxwell, Richard Maxwell, Dane Culverson, Jim Mann, Charles Livingston, Mike Webb, Lyle Roberts, Dr. Shawn Surratt, Angie Tyus, Dr. Akash Ghai, Dr. Brian Guapp, Rick Ragan, Shasta Jackson, Winston Brock, Jr., Mark Zorn, and Keith Trawick and Devin Ross with Gentiva Hospice.

John Earl Cloud was born October 25, 1938 to the late Joe and Jessie Mae Cloud. He is survived by his wife, Delores Trawick Cloud, of 57 and a half years. Daughters, Denise (Ricki) Laing of Bainbridge, Alicia (Troy) Sheffield of Iron City and... View Obituary & Service Information

The family of John Earl Cloud created this Life Tributes page to make it easy to share your memories.

Send flowers to the Cloud family.