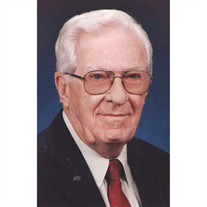 The Rev. John Milton Dickson, Jr. passed away Monday, February 6, 2012 at Baptist Hospital in Gulf Breeze, Florida. Services will be held at 11:00 a.m., Friday, February 10, 2012, at Cox Funeral Home Chapel. Dr. Leroy Spinks will officiate. The members of the Tommy Wheeler Sunday School Class of First Baptist Church will serve as honorary pallbears. The family will receive friends immediately following the service. The interment will be held at 3:00 p.m. (2:00 C.S.T.), at Riverside Cemetery in Marianna, Florida. John Milton Dickson, Jr. was born January 19, 1919 in Marianna, Florida to John Milton Dickson, Sr. and Louise Bevis Dickson. Rev. Dickson pastored churches in Florida and Georgia for over forty years. He also served as Protestant Chaplain at the Florida School for Boys in Okeechobee, Florida for 8 years. In Okeechobee County he also spent time working as Chief Juvenile Counselor. Rev. Dickson moved to Bainbridge, where he lived for 25 years. From there he moved to Pensacola, Florida. While in Bainbridge, he was a member of First Baptist Church; where he served as a deacon and was an active member of the Tommy Wheeler Sunday School Class. John Dickson was preceded in death by his wife of 58 years, Lenora C. Dickson, and his second wife, Arlene Cowart Dickson. He is survived by his daughter, Arlene Ryals Henderson and husband, Rex of Opp, Alabama; two sons, James B. Dickson and wife, Sharon of Pensacola, Florida, and Richard W. Dickson and wife, Rhonda of Allen, Texas; 3 granddaughters and 7 great-grandchildren.

The family of John Milton "Dickson, Jr." created this Life Tributes page to make it easy to share your memories.