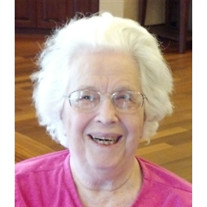 LaVerne Luke McDonald Gay of Hialeah Lakes, Florida, died peacefully on December 21, 2014 in Moultrie, Georgia at the age of 91. A graveside service will be held at 11:00 a.m., Tuesday, December 23, 2014, at New Bethel Baptist Church Cemetery in Meigs, Georgia. Pastor Mack E. Luke will be officiating. The family will greet friends immediately following the service. Mrs. Gay is survived by her son, James William (Jim) McDonald and his wife, Barbara of Thomasville, Georgia; her granddaughter, Kellie McDonald Fletcher of Thomasville, and grandson, Daniel Craig McDonald and family of Kissimmee, Florida, daughter-in-law, Jackie Justice McDonald; siblings Betty Luke Joiner, Perry, Florida; Reverend Mack E. Luke (Nannette), Thomasville, Georgia; James Franklin Luke, Birmingham, Alabama; Julia Overbey-Wyrick (Jim), Dauphin Island, Alabama; and Juanita Luke Carnline-Cooley (Will), Thomasville, and maternal Aunt, Ophelia Stanaland Alligood, of Meigs, Georgia. She is preceded in death by her Mother, Mary Annie Stanaland Luke and her Father, Daniel Elder (Doc) Luke; two sons: George Francis McDonald and David Harold McDonald; and granddaughter, Mary Catherine McDonald Thomas. LaVerne was born on December 23, 1922 in Colquitt County, Georgia to Mary Annie Stanaland and Daniel Elder (Doc) Luke. She graduated Moultrie High School and Wayne School of Nursing, Chicago, Illinois. She married James Francis McDonald in September, 1941 just prior to World War II. Over the next few years, the couple welcomed three children into their home. She taught them to love others and encouraged her children to set and follow their goals. Her career included private nursing in Miami Beach, Florida, and retail sales where she was manager for Diana Shop in Opelika, Alabama. She returned to south Florida where she retired from Sunland Health. In later life, she married Logan T. Gay, March, 1993, in Las Vegas, Nevada, who preceded her in death. Mrs. Gay was passionate about her family, her home on Flamingo Lake; Miami; and her beloved Poodles. As one Poodle passed on, she obtained another and each was given the name "Fe' Fe." She was outgoing and friendly and cultivated close friendships over the years, one with her neighbor, John Miranda. Every Friday evening they enjoyed chatting and sharing pizza together. Even though Mr. Miranda was younger, they shared a special bond and after her health declined and she required physical care, on his way to his family home in Rhode Island, Mr. Miranda would visit her in Moultrie. Mrs. Gay was a very independent person, as her nickname, "Boss," exemplifies. Her "yes" was "yes" , and her "no" was "no." LaVerne was an avid volunteer with Palm Springs General Hospital, Miami, where she served many years, several of which as President. She was loved by the medical and nursing staff there as well as the patients. She received honors for her volunteer service. She was a Gold Star Mother and the City of Hialeah dedicated the David McDonald Park & Aquatic Center, 7505 West 12th Avenue, Hialeah, in memory of her son, David, who gave the ultimate sacrifice for his country in Vietnam on April 4, 1969. On-line condolences may be sent at www.coxfuneral.net. Cox Funeral Home in charge of arrangements.

The family of LaVerne McDonald-Gay created this Life Tributes page to make it easy to share your memories.

Send flowers to the McDonald-Gay family.