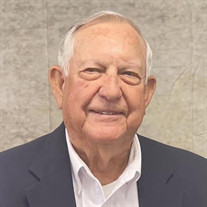 Mr. Lewis E. Jones of Bainbridge passed away on Saturday, August 21, 2021, at Bainbridge Memorial Hospital. Services for Mr. Jones will be held at 3:00 p.m., Saturday, August 28, at First Baptist Church in Bainbridge, Georgia. Interment will follow in Oak City Cemetery. The Rev. Chris Humphries and Rev. Earl Baron will officiate. Chris Mullennix, Brian Mullennix, Lou Dryka, Tim Smith, Hugh Lanier, and Nathan Harrell will serve as pallbearers. Members of the Baraca Sunday School class will serve as honorary pallbearers. The family will receive friends before the service, beginning at 1:00 pm. Mr. Jones was born in Blakely, Georgia on October 26, 1937, to the late Idus Lewis and Edith Smith Jones. On December 6, 1959, he married Clarene Killebrew. Together, they shared over 62 years of marriage. Lewis was an active member of First Baptist Church in Bainbridge where he served in many capacities. He served as the lead usher, was a member of the Baraca Sunday School Class, and served as the Brotherhood Director. At First Baptist Church, he was known as the “jack of all trades” for his willingness to help in any way possible to further the work of the church. He also served on numerous committees over the years. As a former member of Calvary Baptist Church, he served on the Board of Deacons. He also served as the interim music director, Sunday School teacher even teaching a Sunday School class over the radio, and as youth director. He was a member of the Bainbridge Lions Club having received the Melvin Jones Fellow award in 2011-2012. For 53 years, Lewis worked in the auto parts business eventually owning his own business with his son, Jeff. He was presently a Hospitality Host for Southwind Plantation in Bainbridge. Lewis was known for his servant’s heart. He loved “BIG” to all, and, most especially, his family. He was lovingly known to his siblings as “Little Brother”, to his grandchildren as “Papa” and to his great- grandchildren as “G-Papa”. An avid gardener, he also enjoyed many years of horseback riding, horse events and fishing on Lake Seminole. Mr. Jones is survived by his wife Clarene Killebrew Jones; his children, Celine and Russell Mullennix and Jeff and Stacey Jones; his grandchildren, Chris and Keri Mullennix, Brian and Lauren Mullennix, Kara and Lou Dryka, Chelsey Jones and Madison Jones; and his great- grandchildren, Conner and Lucas Mullennix and Carter and Caleb Dryka. He is also survived by his siblings, Martha Ann and Billy Glass, Judy Howard, and Clarence Jones. In addition to his parents, Mr. Jones was predeceased by his great-grandson, Grady Mullennix. Flowers will be accepted, or memorials made to the charity of your choice. Online condolences may be sent at coxfuneral.net. Cox Funeral Home is in charge of arrangements.

The family of Mr. Lewis E. Jones created this Life Tributes page to make it easy to share your memories.

Send flowers to the Jones family.