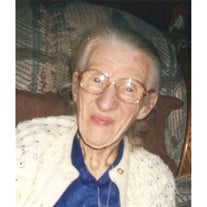 Mrs. Lillian Blute Lawhorn died Tuesday, March 6, 2012, at Bainbridge Healthcare in Bainbridge, Georgia. Services for Mrs. Lawhorn will be Saturday, March 10, 2012, 2:00 p.m., at Cox Funeral Home Chapel in Bainbridge. The Rev. Jerry Bishop will be officiating. Interment will be in Greenwood Cemetery in Cairo, Georgia. Lillian Veronica Blute was born March 20, 1920 to Joseph F. Blute and Catherine McKay Blute of Boston, Massachusetts. She married Joel Andrew Lawhorn. They were married for over 50 years. In 1995, he preceded her in death. Lillian worked hard as a housewife and then, a mother. She loved to volunteer at the Grady County Senior Center. She was a faithful member of Eastside Baptist Church in Cairo. After her husband's death, she moved to Attapulgus, Georgia to be near her children. There, she attended Attapulgus Baptist Church. Her children feel very fortunate to have had such a wonderful mother. Lillian Lawhorn is survived by her children, Warren Lawhorn and Lois Rowan of Attapulgus, Georgia, and Walter Lawhorn and wife, Jane Clare of Springhill, Florida. She was preceded in death by a daughter, Bertha Amelia Lund. Mrs. Lawhorn is also survived by her grandchildren, Heather Weekley, Taryn Lawhorn, Kellianne Lawhorn, Walter Lawhorn, Craig Lawhorn, Diane and David and 5 great grandchildren. Memorial contributions may be made in Lillian's honor to the Grady County Senior Citizens Center, 33 17th Avenue NW, Cairo, Georgia 39828.

The family of Lillian Lawhorn created this Life Tributes page to make it easy to share your memories.

Send flowers to the Lawhorn family.