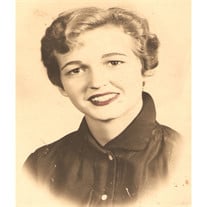 Maedelle Faircloth Walker, 74, of Bainbridge, Georgia, passed away in the early hours of Friday, March 23, 2012, with her family by her side, at Bainbridge Health Care. Funeral arrangements are being directed by Cox Funeral Home, 202 West Street, Bainbridge. The family will receive friends Sunday afternoon, March 25, 4:00-6:00 p.m., at the funeral home. The services will be held Monday, March 26, 2:00 p.m., at Fellowship Baptist Church. The Rev. Steve Brooks, officiating. Interment will follow in Roselawn Memory Gardens. Mrs. Walker was born in Bainbridge, Georgia, October 13, 1937, and graduated from Bainbridge High School. After graduation, she worked for the Federal Bureau of Investigation in Washington, DC. Maedelle later came to Tallahassee, Florida to a position as a secretary at Florida State University. As a US Air Force wife, she lived at Lockborne Air Force Base, Ohio, Homestead Air Force Base in Florida, and later traveled extensively in Europe and Asia. Her travels led her to establishment of her own travel agency, Flying W of Bainbridge; where she won numerous sales awards from both cruise lines and airlines. Maedelle was a life-long member of the First Presbyterian Church in Bainbridge. She enjoyed bridge, puzzles and caring for the beloved grandchildren of their Mae Mae. Maedelle is survived by her children: Shelly Walker Hinson of Bainbridge; Brett Edward Walker and wife, Sherry of Montgomery, TX; and grandchildren, Cory and Alex Walker, Tallahassee FL; Cole, Jack, and Marlee Hinson, Bainbridge; Billie Anne Wauchman and a great-granddaughter, Reese, of Augusta GA. She was predeceased by a son, Stephen Walker, and a son-in-law, John Hinson. In lieu of flowers, the family requests memorial contributions to Friendship House of Bainbridge, PO Box 513, Bainbridge GA, 39818.

Maedelle Faircloth Walker, 74, of Bainbridge, Georgia, passed away in the early hours of Friday, March 23, 2012, with her family by her side, at Bainbridge Health Care. Funeral arrangements are being directed by Cox Funeral Home, 202 West Street,... View Obituary & Service Information

The family of Maedelle Faircloth Walker created this Life Tributes page to make it easy to share your memories.

Send flowers to the Walker family.