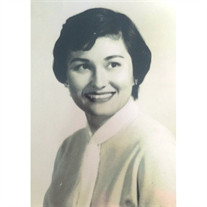 Margery Virginia Bridges Rogers, of Macon GA, passed away in the hospital, on September 18, 2016. She was 91 years old. Margery is survived by her children, Kathryn Eisermann-Rogers of Miami, FL and Margery McKay of Atlanta, GA; her four grandchildren Heather Green of Los Angeles, CA, Alexandra Eisermann, Natalie Eisermann and Jacqueline Eisermann of Miami, FL. She is predeceased in death by her daughter Tina Agnes Green of Los Angeles, CA; her father Robert Euelle Bridges and her mother Margery Anderson Bridges of Brinson, GA. Margery was born an only child in Shanghai, China on July 21, 1925. She lived a unique and extraordinary life in China until the age of sixteen. She returned to live on the family farm in Brinson, Georgia after the Japanese incursions into China and her father's recruitment with the OSS and his subsequent imprisonment in a Japanese prisoner of war camp. Despite not having contact with her father for four years, Margery graduated as valedictorian from Bainbridge High School and attend the University of Wisconsin. She later met her husband, Col. (ret.) William C. Rogers, while giving assignments to new recruits at the Bainbridge Air Base. Margery proudly recounted telling the young Air Force officer to \\Follow me, Lieutenant\\ which he happily did for 61 years. He eventually was promoted to full Colonel but it was a not well hidden secret that Margery was "the General." Over the years, the couple raised three girls and Margery taught them the compassion, hard work and skills that would forge their eventual successful careers. Her surviving children remember her as a brilliant, sympathetic, selfless and understanding mother who encouraged them remain curious and to pursue their goals. She famously said her biggest regret in life was not being able to have and raise more children. Her love of her children and grandchildren was truly infinite and unconditional. Margery\\'s signature gift was caring for her family and friends, especially through delicious home-cooked meals from scratch. She also embraced her life as the wife of a military officer and the many adventures that path provided. Not only was Margery known for her ease in frequent conversation with total strangers, but she was also brilliant with numbers and games including mahjong, bridge and crossword puzzles. She had a real zest for life and loved to dance and entertain. Margery was an avid reader of mystery-thrillers and she was one of the original \\trekkies\\ never missing one episode of Star Trek. She was a talented interior designer, creating beautiful homes for her family, in addition to being an extraordinarily gifted writer. She will be remembered mostly as a woman with tremendous love and pride in her family. A person always loving and always loved. A funeral service is scheduled for 11:00 a.m., Saturday, October 15, at the Cadwell Chapel of Cox Funeral Home at 202 S. West Street, Bainbridge, GA 39817 with graveside internment at Brinson cemetery to follow. The Rev. Judy Jones-Keith will officiate the ceremony. All are welcome to attend and celebrate Margery\\'s life. In lieu of flowers, donations made to Northminster Presbyterian Church, 565 Wimbish Road, Macon GA 31210, (telephone : 478.477.6647 ) would be appreciated

Margery Virginia Bridges Rogers, of Macon GA, passed away in the hospital, on September 18, 2016. She was 91 years old. Margery is survived by her children, Kathryn Eisermann-Rogers of Miami, FL and Margery McKay of Atlanta, GA; her four grandchildren... View Obituary & Service Information

The family of Margery Virginia Rogers created this Life Tributes page to make it easy to share your memories.

Margery Virginia Bridges Rogers, of Macon GA, passed away in...

Send flowers to the Rogers family.