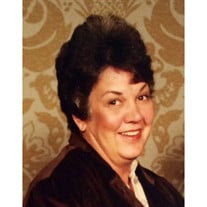 Mary Barber Cox, 84, of Bainbridge, GA, died peacefully on Monday, November 24, 2014, at Memorial Manor in Bainbridge, GA, following an extended illness. Mrs. Cox was well-known as an accomplished artist whose colorful paintings and pen-and-ink drawings of historical buildings and homes are prized by collectors throughout southwest Georgia. Throughout the decades while her late husband Walter Cox served as Mayor of Bainbridge and State Representative in Southwest Georgia, and subsequently when her daughter Cathy served as State Representative and as Georgia's Secretary of State, she designed Christmas cards with drawings of area historical buildings, including the State Capitol, which became framed works of art by recipients. She taught art privately to local artists and children in her own studio, helped found the Bainbridge-Decatur County Council for the Arts, served as president of the Decatur County Artists' Guild, and exhibited her work extensively over the years throughout Georgia and the southeast. For more than a decade, she co-owned and operated The Skill Mill, a shop for area artists and craftspeople to exhibit and sell their works. She was born in Bainbridge, graduated from Bainbridge High School, earned a bachelor of fine arts degree, concentrating in ceramics and sculpture, from Wesleyan College, Macon, GA, and pursued graduate study in constructive design with an emphasis on ceramics at Florida State University. She taught art in South Carolina at Erskine College, Columbia College, and the Columbia Museum of Art, and worked as the art coordinator for the Richland County school system in the 1950's before returning to Bainbridge. She later taught art periodically in the Decatur County schools and at Bainbridge College. She also taught private piano lessons and served as the organist for Temple Beth El for many years. Mrs. Cox was a lifetime partner to her husband in the family funeral business, Cox Funeral Home in Bainbridge, where she played the piano and organ for funeral services, arranged flowers for services, held a license as an apprentice funeral director, and lived for many years with her family in the funeral home. She was honored during her life for her artistic talents and her many community contributions, winning numerous awards at art shows in the local area. The City of Bainbridge proclaimed Nov. 23, 2014, the day before her death, as Mary Barber Cox Day in celebration of her artwork, especially her famed Christmas ornaments, which for more than 20 years featured drawings of historic Bainbridge buildings that Mrs. Cox provided to the city. She was named a Paul Harris Fellow by the Rotary Club of Bainbridge. Mrs. Cox gave generously of her talents to many civic causes, donating her artwork and her time, individually and as the wife of an elected official. She raised her four daughters to do the same, and is survived by them - Cathy Cox, president of Young Harris College, and her husband Mark Dehler, of Young Harris, GA; Karen Cox, recently retired area-superintendent of Fulton County Schools, and her partner Vicki Burrow of Avondale Estates, GA; Glennie Bench, CFO of Southwest Georgia Oil Co. and Bainbridge City Council member, and her husband Steve Bench of Bainbridge, GA.; and Kim Burrell, Mathematics Teacher at Bainbridge High School and her husband Hal Burrell of Bainbridge, GA; and three grandchildren whom she adored, Steven Bench, a student and football player at the University of South Florida, Tampa, FL., Peyton Burrell, an honor graduate of Bainbridge High School, and Walt Burrell, a freshman and two-sport athlete at Bainbridge High School. She was preceded in death by her husband, Walter E. Cox. Funeral services will be held Wednesday, November 26, 2014, at 2:00 p.m., at First Baptist Church in Bainbridge, GA. Visitation with the family will be held Tuesday afternoon, November 25, 2014, from 5:00 to 7:00 p.m. at the Firehouse Gallery in downtown Bainbridge. In lieu of flowers, the family requests that memorial gifts be made to the Bainbridge-Decatur County Council for the Arts, PO Box 35, Bainbridge, GA 39818, or the Walter & Mary Cox Scholarship Fund at Bainbridge State College, PO Box 990, Bainbridge, GA 39818.

The family of Mary Cox created this Life Tributes page to make it easy to share your memories.

Send flowers to the Cox family.