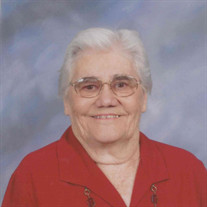 A celebration of the life of Melba Kyser Lasseter Byrd will be held at 2:00 p.m., Saturday, May 21, at First Baptist Church in Cairo, Georgia. The Rev. Chris Allen will officiate. The family invites those that attend to join them in the Fellowship Hall after the service. Melba Kyser Byrd passed away peacefully on January 17, 2022. She was born in Dothan, AL on August 28, 1924 to Lina Kyser and Charlie D. Kyser. She spent her childhood on a farm near Dothan before moving to Columbus, GA, where she worked as a teenager in the cotton mill there. In Columbus, she married her first husband, Joe Damon Lasseter, who was later killed in World War II. She was a member of the Baptist church, and it was through her church activities that she met her second husband, Glenn N. Byrd. They were married in 1949 and he was ordained as a Baptist minister in 1951. They had two children, Joel and Jeanene. Until Rev. Byrd’s death in 1994, she lived the active and demanding life of a minister’s wife as he completed his education and served as pastor in a number of towns in Georgia, including Macon, Toomsboro, Columbus, Toccoa, and Richmond Hill. He was an Associational Missionary in Grady County, GA from 1970 until his retirement in 1992. She taught Sunday School and Training Union classes in her church and was active in church organizations such as WMU and WOM. She also participated in community organizations such as PTA and Kiwanis Club. She enjoyed the outdoors and working with young people, and was very active in church youth camps, Cub Scouts, Boy Scouts, and Girl Scouts. She served as a crossing guard for Cairo Elementary School for many years. Through this work, she had a lasting impact on the lives of many young people over the years. She is survived by her children, Joel Byrd (and wife Robin Lucarelli) of Raleigh, NC and Jeanene Johnson of Conyers, GA; grandchildren Brian Byrd (and wife Blythe) of Asheville, NC, Brittany Teets (and husband Robert) of Conyers, GA, and Ben Johnson of Cumming, GA; and great grandchildren Gabrielle and Logan Byrd, Charlie Johnson, and Robby Teets. In lieu of flowers, the family requests that contributions may be made to the American Cancer Society (www.cancer.org).

A celebration of the life of Melba Kyser Lasseter Byrd will be held at 2:00 p.m., Saturday, May 21, at First Baptist Church in Cairo, Georgia. The Rev. Chris Allen will officiate. The family invites those that attend to join them in the Fellowship... View Obituary & Service Information

A Celebration of Life to honor Melba Byrd will be held May 21, 2022

A celebration of the life of Melba Kyser Lasseter Byrd will be...

Send flowers to the Byrd family.