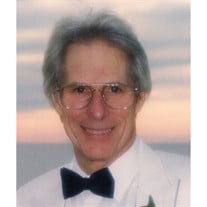 Neal Lloyd First, PhD, a pioneering scientist in genetics and agriculture, died November 20, 2014, of complications from cancer. He was 84. Dr. First was born on October 8, 1930. He was raised on a farm in Ionia, Michigan where he developed a love of animals and agriculture. After earning his undergraduate degree from Michigan State University, he was drafted into the US Army, serving as a fixed radio signal operator during the Korean War. After the war, he returned to Michigan State University, earned a PhD in reproductive physiology, and accepted a position at the University of Wisconsin-Madison in 1960, where he remained until his retirement in 2005. After his retirement he moved to Starkville, Mississippi, where he was a professor emeritus at Mississippi State University. His contributions to the fields of agriculture and genetics include major advances in mammalian in-vitro fertilization, embryo development, embryo cloning of cattle, and nuclear transplantation in embryos. He received numerous awards for his research, including the Morrison Award for animal science, the Von Humboldt award, the Upjohn research award, and the Wolf Prize, which is often called the Nobel Prize for agriculture. In 1989, he was inducted as a member of the National Academy of Sciences. His work and writing on biotechnology and animal genetics continued until shortly before his death. Dr. First lectured and taught around the world. When not in his lab, he could be found caring for or riding his beloved horses. He enjoyed running, camping trips with his children, searching for sand dollars on Gulf beaches, and spending time with his family. He was often heard whistling or singing with gusto, if slightly off-key, and loved to dance, especially waltz and polka. He is survived by his wife, Dr. Marijo Kent-First, and their two children Patrick and Nicholas, his former wife Edith Kerstetter First and their four children Douglas, Eric, Phillip, and Patricia, eight grandchildren, and one great-grandchild, as well as numerous in-laws, nieces and nephews. Dr. First was preceded in death by his parents, Glenn and Irma First, and his brothers John and Richard. Funeral services will be held on Saturday, November 29, 2014 at Cox Funeral Home in Bainbridge, Georgia, followed in January by a memorial service in Madison, Wisconsin. In lieu of flowers, contributions may be made to support graduate student studies at the Endocrinology and Reproductive Physiology Program at the University of Wisconsin Foundation (http://erp.wisc.edu/giving/index.html).

Neal Lloyd First, PhD, a pioneering scientist in genetics and agriculture, died November 20, 2014, of complications from cancer. He was 84. Dr. First was born on October 8, 1930. He was raised on a farm in Ionia, Michigan where he developed... View Obituary & Service Information

The family of Neal Lloyd First, PhD. created this Life Tributes page to make it easy to share your memories.

Neal Lloyd First, PhD, a pioneering scientist in genetics and...