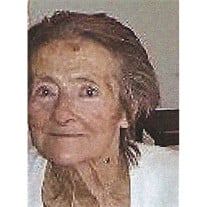 Mrs. Ofellon "Sue" Shead, age 81, passed away early Monday, March 11, 2013, at her home in Whigham, Georgia. A private, family service will be held at a later date. Ofellon Stephens was born May 7, 1931 in Cook County, Georgia to Robert Stephens... View Obituary & Service Information

The family of Ofellon Sue Shead created this Life Tributes page to make it easy to share your memories.

Send flowers to the Shead family.