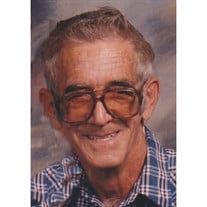 Mr. Robert Frank Webb, Jr, age 74, passed away Monday, October 31, 2016, at his home in Iron City, Georgia. Services for Mr. Webb will be held at 2:00 p.m., Thursday, November 3, at the Cadwell Chapel of Cox Funeral Home. Rev. Dewitt Phillips will be officiating. The interment will be held at 1:00 C.S.T. (2:00 E.S.T.), Friday, November 4, at the Winston Memorial Cemetery in Haleyville, Alabama, with full military honors. The family will receive friends on Wednesday, November 2, at Cox Funeral Home, 6:00-8:00 p.m. Robert Frank Webb, Jr. was born February 27, 1942, in Blunt County, Tennessee. His parents, Robert Frank Webb, Sr. and Rosa Ward Webb, preceded him in death. After graduating from high school Robert joined the United States Navy. He served the Navy for almost 19 years before retiring. A talented diesel mechanic, it was his job in the Navy and he continued to work as a mechanic for Ward Truck Sales. Robert married the love of his life, Kathleen Littrell Webb. They were married 47 years before she passed away in November of 2011. Robert loved to restore old cars, the older the better. He loved mud bogging. He was a loving father and grandfather. Robert will be missed by the family and friends he loved so very much. Robert Webb, Jr. is survived by his children, Dennis Baker and wife, Carolyn of Haleyville, Alabama, Jimmy Webb of Donalsonville, Georgia, and Katrina Webb of Iron City; his sister, Inell Garrison of Haleyville; 8 grandchildren; and 13 great-grandchildren. He was preceded in death by his parents, wife, daughter, Karen and son, Kenneth. Memorial donations may be made in his honor to the American Cancer Society, P. O. Box 22478, Oklahoma City, Oklahoma 73123.

The family of Robert Frank Webb, Jr. created this Life Tributes page to make it easy to share your memories.