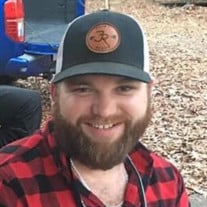 Mr. Royce Dylan (Gibby) Rhodes, age 28, passed away Saturday, February 12, 2022, at his home in Brinson, Georgia. A memorial service to honor Dylan will be held at 3:00 p.m., Friday, February 18, in the Cadwell Chapel of Cox Funeral Home. Pastor Anthony Mims will officiate. Royce Dylan Rhodes was born September 3, 1993, in Columbus, Georgia to Mitchell Aubrey and Donna Marie Norris Rhodes. Dylan married his soulmate, Calee Harris Rhodes. Gibby loved farming and loved working for Brian Dean Farms. The Deans were like family to Gibby. Hunting, fishing, being outdoors, these things brought him joy. He especially loved hunting and fishing with his brother, Jesse. He was also an avid Alabama fan. Family was all important to Dylan. He took care of everyone. His heart belonged to his children and wife. A loving daddy, husband, son, brother, and friend, Gibby will be dearly missed by all who knew him. Dylan (Gibby) is survived by his wife, Calee Harris Rhodes; children, Mariah and Drake; parents, Mitchell and Donna Rhodes; brother, Jesse (Chastity) Rhodes; nieces and nephews, Aubrey, Madison, McKenna, David, and Jacob. He was very close to his aunts, uncles, and cousins. He was preceded in death by his grandmother, Mary Norris; grandparents, Aubrey and Fay Rhodes; and his uncle and godfather, Randy Wangle.

The family of Mr. Royce Dylan Rhodes created this Life Tributes page to make it easy to share your memories.

Send flowers to the Rhodes family.