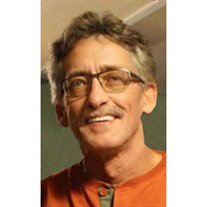 Graveside services for Steven D. Maday, 62, of Bainbridge, GA, formerly of Fairmont, MN, will be 1:00 p.m. Monday, June 27, 2016, at the Fairview Memorial Park Cemetery in Fairmont with full military honors by the Lee C. Prentice American Legion Post #36 and the Martin County Veterans of Foreign Wars Post #1222. There will be a visitation and time of sharing following the graveside service from 2:00 p.m. to 4:00 p.m. Monday, June 27, 2016, at the Lakeview Funeral Home in Fairmont. Steven passed away Wednesday, June 15, 2016, at his home in Bainbridge, GA, where Steve fought a tough battle with cancer over the past year. The Lakeview Funeral Home and Cremation Service of Fairmont is assisting the family with arrangements. Steve "Mudd" Maday was born on February 25, 1954, in Fairmont, MN, to Donald and Mary Ellen Maday. He attended school in Fairmont, where he graduated in 1973. Steve was in the Navy from 1973 to 1977. He then returned to Fairmont and was employed for many years with Railway Motors and Blachowske Truck Lines, where in recent years he was the manager of their shop in Bainbridge, GA. Steve enjoyed working on cars, cooking, shooting pool, anything that had to do with racing, and spending time with friends. Steve is survived by his son Dallas (Traci) Maday of Ringsted, IA, his daughter, Tamsen Leimer, and his two grandsons, Ben and Nathan Leimer of Stewartville, special friend Betsy and her mom and Steve's care taker, Nita, of Bainbridge, GA, siblings Richard (Susan) Maday, Sheryl (Joe) Frascella, Rod Maday, Renae (Scott) Janssen, Doug (Jenny) Maday, along with many nieces, nephews and friends. He was preceded in death by his parents and grandparents. Cox Funeral Home in charge of local arrangements. On-line condolences may be sent at www.Coxfuneral.net or ww.lakeviewfuneralhome.net.

The family of Steven Duane Maday created this Life Tributes page to make it easy to share your memories.

Send flowers to the Maday family.