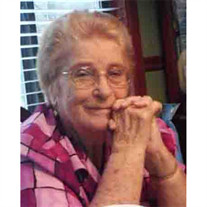 Mrs. Tiercy Janette Sapp passed away Monday, May 28, 2012, at Memorial Hospital in Bainbridge, Georgia. Services for Mrs. Sapp will be held 11:00 a.m., Thursday, May 31, 2012, at Cox Funeral Home Chapel. The Rev. Charles Taylor will be officiating. Following the service, a private, family interment will be held at Cedar Grove Cemetery in Climax, Georgia. Grandsons and Great Grandsons, Jason Sapp, Levy Sapp, Lance Powell and Ryan Powell, will serve as pallbearers. The family will receive friends one hour prior to the service, beginning at 10:00. Tiercy Janette Taylor was born in Climax, Georgia, November 23, 1927, to James Henry Taylor and Flonnie Iola Griffin Taylor. On November 26, 1945, she married Guy Opsal Sapp. They were married 38 years, until his death in 1983. Janette retired in 1994 from 25 years of service at the Bainbridge State Hospital. She worked as a nurse and then as a shift supervisor. Mrs. Taylor was a member of Beulah Thomas Baptist Church. She was a faithful member of the Charles Stanley prayer group. Janette loved to cook and put up vegetables. Her other love was fishing. Janette Sapp always tried to do for others as she would have them do for her. Janette Sapp is survived by her sons, Steve and Joel (Buddy) Sapp, both of Climax, Georgia; brother, John Taylor and wife, Tammy of Donalsonville, Georgia; grandchildren, Jan Bennett and husband, Chad of Bainbridge, Jennifer Granade and husband, Curt of Albany, Georgia, Jeff Sapp and wife, Judy of Maryland, Levy Sapp of Cairo, and Jason Sapp and wife, Courtney of Bainbridge; great-grandchildren, Lance Powell and wife, Mindy, Ryan Powell, Kristen Bennett,Taylor Sapp of Bainbridge, Caroline Granade of Albany and Rayna Sapp of Iron City, Georgia; and great-great grandchild, Gunner Powell of Bainbridge. She was preceded in death by her parents, husband, and daughter, Mary Godby. In lieu of flowers the family request donations made to the Lighthouse Children's Home, 7771 Mahan Drive, Tallahassee, Florida 32309.

Mrs. Tiercy Janette Sapp passed away Monday, May 28, 2012, at Memorial Hospital in Bainbridge, Georgia. Services for Mrs. Sapp will be held 11:00 a.m., Thursday, May 31, 2012, at Cox Funeral Home Chapel. The Rev. Charles Taylor will be officiating.... View Obituary & Service Information

The family of Tiercy Janette Taylor-Sapp created this Life Tributes page to make it easy to share your memories.

Send flowers to the Taylor-Sapp family.