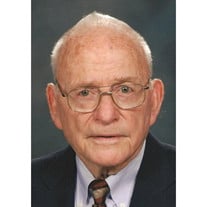 Mr. Wesley Leo Miller Mr. Wesley Leo Miller passed away Saturday, March 17, 2012, at his home in Cairo, Georgia. He was 87 years old. A memorial service will be held 4:00 p.m., Saturday, April 7, 2012, at Midway Baptist Church. The Rev. Paul Jones will be officiating. A private, family interment will follow in the Midway Baptist Church Cemetery. Wesley Leo Miller was born September 9, 1924 in Grady County, Georgia to Wesley Perry Miller and Mellie Rozetta Ferrell Miller. As a child of the Great Depression, he grew up a hard-working man of integrity. He believed in always giving more than he got. Leo served proudly as a lieutenant j.g. in the United States Naval Air Corps during World War II in the Pacific Theater of Operations and flew the PB4Y. He served in the Naval Reserves until 1951. He loved the woods and worked devotedly as a forester and head of procurement for Georgia Crate and Basket Company in Thomasville, Georgia for thirty nine years. He was an avid fisherman and hunter and was a true sportsman of the old school. He passed on his love and respect for nature to countless other people including his son and son-in-laws. "Pop" , as his family called him, was known for his sense of humor and could recite a story that often left the listener with tears of laughter or sadness, and sometimes both. Behind his sometimes gruff exterior was a tender heart of gold and he showed this quietly and in many ways to family, friends and strangers. Mr. Miller was a member of Eastside Baptist Church in Cairo. Always active in his community, he was a past member of the Thomasville Exchange Club, Elks Club and Moose Club, where his family spent many happy times in the clubhouse and at the pool. He was also a member of the Cairo Golden Kiwanis. Mr. Miller was preceded in death by his parents, a younger brother, Wallace Miller and an infant sister, Janet. Leo Miller is survived by his children: Pam Bucher and husband, Tom of Dunn Loring, Virginia, Sandy Hooks and husband, Alex of Moultrie, Georgia, Paula Higgins and husband, Alan of Lakeland, Florida, and Charlie Miller and wife, Melinda of Columbus, Georgia; brother, Dwight Miller and wife, Annie Will of Buford, Georgia; 9 grandchildren,Trish Meschel, Frank Bucher, Leigh Lauer, Wes Hooks, Clay Miller, Patrick Miller, Melissa Walls, Julie Young, and Rachel Higgins; 7 great grandchildren; and 10 nieces and nephews. On-line condolences may be sent at www.Coxfuneral.net. The family requests that contributions be made to the Roddenberry Memorial Library, 320 North Broad Street, Cairo, Georgia 39828, the American Diabetes Association, 1701 N. Beauregard Street, Alexandria, Virginia 22311, or a charity of your choice.

The family of Wesley Leo Miller created this Life Tributes page to make it easy to share your memories.

Send flowers to the Miller family.