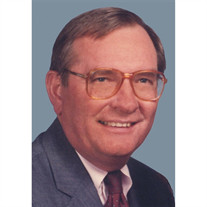 William (Billy) C. Mills passed away on Thursday September 21, 2017, after complications following a car accident. Billy was born in Whigham Georgia in 1932, son of Annie and Idason Mills. He was a straight A student through school in Whigham and attended Florida State University on a baseball scholarship, where he was called "Cooter" Mills. Playing Shortstop, he was the captain of the FSU Seminoles baseball team, several time All-American, and still holds batting records on the FSU baseball books. He played minor league baseball for the Tallahassee Capitals during summers while in school, and was recruited by several major league baseball teams. He was also the president of his senior class at FSU. Upon graduation, Billy married JoAnn Taylor. Billy and JoAnn had four children - Tasha, William C., Jr. (Curtis), Conrad, and Harrell (Hal). Billy loved his children and was loved by them. After graduating from FSU, Billy was employed by Riegel Textiles in Sales. After a series of promotions, he was moved to Manhattan, New York and promoted to Vice President of Marketing. He was recruited by JP Stevens Textiles as Vice President of Marketing in New York, where he worked for several years until joining Burlington Industries as Vice President of Marketing. He was a division president at Burlington through his 30s. He lived in Huntington, Long Island while in New York. Billy left Burlington to move back to the South, where he started an executive recruiting business in Atlanta. This business grew to multiple locations in Georgia and Tennessee. During this time, Billy started a large scale Santa Gertrudis cattle farming operation, centered in his hometown of Whigham, Georgia, with multiple farms in South Georgia and Carrollton Georgia. He loved his cattle as he did his family. Billy was an avid golfer with a near-scratch handicap. He played all over the country, and was Club Champion at the Huntington Crescent Club. He was also an avid tennis player and, in his later years in Atlanta, led numerous teams to ALTA and USTA championships. Billy was Scoutmaster of Troop 115 in Huntington New York, while his sons were in the Boy Scouts. Billy is survived by a brother, Eugene (Gene); his children, Tasha (and Mike Ellis), Curtis, Conrad and Hal; grandchildren Christie Trilla, Matthew Ellis, Tate Mills and William Jack Mills; great granddaughter Lilliana Ellis; and his long-time close friend, LuAnn Haywood. Billy was a force in life and will be greatly missed by his family and many friends.

William (Billy) C. Mills passed away on Thursday September 21, 2017, after complications following a car accident. Billy was born in Whigham Georgia in 1932, son of Annie and Idason Mills. He was a straight A student through school in Whigham... View Obituary & Service Information

The family of William (Billy) C. Mills created this Life Tributes page to make it easy to share your memories.

Send flowers to the Mills family.