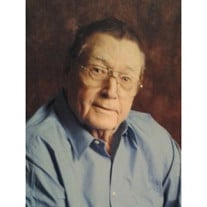 William Jackson Salter, 91, passed away on Sunday May 21, 2017 at LifeCare Hospitals of Dallas in Dallas, Texas. He was born on October 15th, 1925 in Bainbridge, Georgia to Paul Estille and Temptie Elizabeth Thompson Salter. He was the second of seven siblings. William grew up in Climax, Georgia and graduated from Army War College in Carlisle, Pennsylvania. At 91, William was one of the few remaining World War II vets. He served in the infantry in the European theatre and fought in The Battle of the Bulge. One night, his camp was hit by artillery and all were killed but him. The Nazis marched through what was left of the camp. There he was discovered severely injured and was left for dead. It was not until later that day when allied troops found him that he received medical care. He was sent to England where he recovered from his wounds, only to be sent back to the front lines where he fought until the end of the war. As one of his grandsons would say, \\He was tougher than a $3 steak.\\ He returned home and married Esther Rose on January 1, 1949. They had 4 children. Family was always important to him. William moved to Arkansas in 1977 and Texas in 2002, but he was always a Georgia boy at heart. He had many loves, the Atlanta Braves being one of them. If you ever started talking baseball to him, you had better get comfortable because it was going to be a long conversation! He loved every moment he got to spend with any of his grandkids. He was married to Esther for 63 years until her death in 2012. He would call back home to talk with his siblings weekly, and he liked getting on Facebook to see family pictures and see how his family was doing. His Facebook profile said \\WW II infantry soldier and just a good ole Georgia plowboy\\. He was more than that, much more. He was a son, brother, soldier, husband, father, grandfather, and great grandfather. But most of all, he was loved and will be greatly missed. William was preceded in death by his parents Paul and Temptie Salter, wife Esther Salter, and brother Spencer Estille Salter. Survivors: Children: Kay Kitchens-Kaaz of Covington, Georgia, Elizabeth Dianne Simmons of Benton, Arkansas, Jean Howell of Batesville, Arkansas, and Dave Salter of Irving, Texas. Siblings: Mildred Salter McNair of Climax, Georgia, Nathan Salter of Bainbridge, Georgia, Edna Salter Brock of Bainbridge, Georgia, James D. (J.D.) Salter of Bainbridge, Georgia, and Joe Salter of Climax, Georgia. Grandchildren: Wayne Boutwell, Steve Boutwell, Tony Howell, Lacy Owen, Kevin Simmons, and Dan Boutwell. Great-grandchildren: Bryce Boutwell, Reid Boutwell, Trevor Boutwell, Tyler Boutwell, Peyton Howell, Paige Howell, Amber Owen, and Kayleigh Owen. He is also survived by numerous nieces and nephews. William will be laid to rest at 1:00pm Saturday, May 27th at the Dallas-Fort Worth National Cemetery. A memorial service will be held at Kingdom Hall of Jehovah's Witnesses, 2804 Rock Island Rd., in Irving, Texas at 1:00pm, on June 17th, 2017. Condolences may be left on William Salter's online guestbook at https://simmonskevina.wixsite.com/williamsalter

William Jackson Salter, 91, passed away on Sunday May 21, 2017 at LifeCare Hospitals of Dallas in Dallas, Texas. He was born on October 15th, 1925 in Bainbridge, Georgia to Paul Estille and Temptie Elizabeth Thompson Salter. He was the second... View Obituary & Service Information

The family of William Jackson Salter created this Life Tributes page to make it easy to share your memories.

Send flowers to the Salter family.